Those of you over 60 will most likely be familiar with the BOY'S OWN ANNUAL, GIRL'S OWN ANNUAL and CHUMS. The term “boy's own” is still used in the media to describe stories of daring, written in the style of yesteryear (during the days of your great grandparents). These three annuals, cornerstones though they were of any collection of English children's annuals, were merely at the tip of a large iceberg. Many hundreds of titles are listed in Bill Lofts' and Derek Adley's OLD BOYS' BOOKS - A COMPLETE CATALOGUE, published in 1969. The term 'Old Boys' Books' is a misnomer, as girls' titles are listed as well. Forty years ago, when I began to actively search for pre-war annuals, most collectors of juvenile books were male, and there was very little interest in girls' annuals. 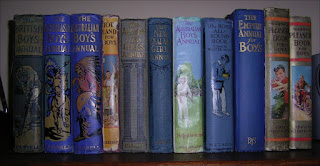 According to an article by Lofts and Adley (the acknowledged experts in this field, although both have long since passed on) in the English Book and Magazine Collector in 1985 (issue #19), the first English annual to include “annual” within its title may well have been CHILD COMPANION ANNUAL (1824). CHILDREN'S PRIZE (later shortened to PRIZE) and CHATTERBOX arrived in 1863, BOY'S and GIRL'S OWN in 1878/9, YOUNG ENGLAND in 1880 and CHUMS in 1893. Many were assembled from either weekly or monthly issues of similarly named STORY PAPERS.

Three other early annuals worthy of note are THE CAPTAIN, BEETON'S CHRISTMAS ANNUAL and CHATTERBOX. The second is well known for the first appearance of Sherlock Holmes in 1887, while THE CAPTAIN's claim to fame was the regular appearance of P G Wodehouse among the list of contributors. Perhaps this annual shouldn't be referred to as such; it is usually found in half-yearly volumes composed of 6 monthly issues. 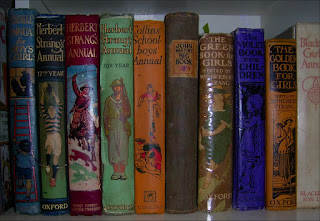 With the arrival of the 20th Century, a number of publishers began producing annuals of original material. Worthy of note are the EMPIRE ANNUAL that resulted in both BOYS and GIRLS volumes from 1909 onwards, and HERBERT STRANG'S ANNUAL FOR BOYS (from 1912) plus MRS STRANG'S ANNUAL FOR GIRLS (1919-1926).

Cassell published a series of annuals for the ‘outposts of the Empire'. These were titles THE [country of sale] GIRL'S (or BOY'S) ANNUAL. Australian and New Zealand editions have been sighted; possibly Canadian, Indian and South African editions were also published, as well as the original British editions.

Following WW1, The Amalgamated Press entered the field. They were already publishing dozens of weekly story papers, e.g. MAGNET, GEM, UNION JACK NELSON LEE and comics, e.g. PUCK and TIGER TIM and decided that there were profits to be made in the seasonal annual trade. Annuals were produced for the Christmas trade and were promoted from mid-October onwards in weekly juvenile publications.

A point worth remembering: annuals usually displayed the following year. MODERN BOYS’ ANNUAL 1936 went on sale towards the end of 1935, ensuring sales would continue well into 1936. A typical Amalgamated Press ad for Christmas, 1935 offered 37 different annuals. The more collectible annuals of the 1930s include all the comic annuals (annuals containing comic strips) and the film annuals, e.g. FILM PICTORIAL, PICTURE SHOW, BOY'S CINEMA.

'Spin-offs' were also produced, as in the case of THE MODERN BOY. Apart from THE MODERN BOYS' ANNUAL, there were THE MODERN BOYS' BOOK OF - ADVENTURE STORIES, FIRE-FIGHTERS, HOBBIES, PIRATES, RACING CARS, TRUE ADVENTURE, AIRCRAFT and MOTORS, SHIPS and ENGINES. The annual appeared from 1932-1941 while the specials appeared from 1936 onwards. Only one edition of the latter appeared but these were sold each year while stock remained. Several of these annuals contained BIGGLES stories and other work of W E Johns, including colour reproductions of his delightful aircraft paintings. Johns wrote most of PIRATES but FIRE-FIGHTERS is probably the rarest and most desirable of the titles listed.

Other annuals worthy of note and well known even in 2015 included the various Disney tie-ins published by Dean, D C Thompson's DANDY and BEANO, the Daily Express RUPERT, Odhams' DAN DARE and EAGLE. 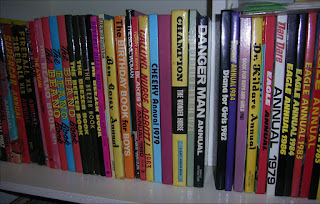 Sales of annuals decreased after WW2 due to many factors (the arrival of cheap American comics, for example) so costs were cut resulting in less pages, shorter stories and less-skilled contributors. There was a change of focus, with TV tie-ins replacing comic and storypaper tie-ins, most of which had disappeared before the end of WW2 and paper rationing. The 1960s saw the demise of illustrations. Photos replaced artwork. The ticklish problem of photo rights caused many publishers to quickly retire TV titles with large casts! The odd annual still appears; DOCTOR WHO for example. I’m not sure why it’s still around. After all, why pay money for a book that most likely reproduces material one can easily find on the Internet? 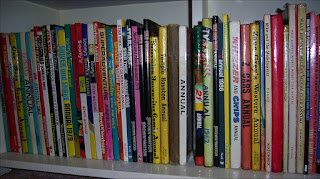 FINDING A HOME FOR MY COLLECTION

In the early 1950s my father gave me his tattered copies of THE GREYFRIARS HOLIDAY ANNUAL 1928 and a CHUMS volume. By the turn of the century I’d acquired complete runs of both annuals, together with hundreds of other annuals. Although I’ve sold and upgraded annuals for 50 years, I still have many in my collection. The question is, what to do with them? Most collectors of annuals I’ve known keep them until their own demise! I on the other hand would prefer to donate the intact collection to a public institution, to enable future researchers in juvenile literature to consult them. So far I’ve had no luck finding a home in Australia. I find this rather sad, as annuals have supplied me with hundreds if not thousands of hours of enjoyment over the past decades. #

Note: Click on the images to enlarge them.
Posted by Tiptruck at 6:43 PM 2 comments:

The bad, the interesting, the good ... 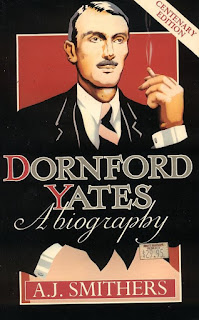 Three books, two on similar subjects; bios, the third a comprehensive historical work. Perhaps the bios could be considered historical works as well, so all three have something in common.

I’ve never read a Dornford Yates (real name Cecil William Mercer) book. Having laboured for many months through Smithers’ bio, I’m positive I never will. It’s not unusual for authors to base works of fiction on their own lives. Yates did, apparently, to more than the usual degree.

This bio would certainly have been welcomed by readers familiar with the author’s books and characters. To the uninitiated like myself, it’s a confusing hodge-podge of real life events and extracts from Yates’ novels, all rolled into one. Having finished the book and breathed a sigh of relief, I still had no real idea of Yates (or Mercer) as a person. In short he started off in the legal profession, wrote occasional fiction for Windsor Magazine before moving to France and taking up writing full time. That’s all I can really recall. Why did I keep on when normally I‘d throw in the towel? I felt I owed it to the late Lynette Hicks who was a collector of Yates’ books. This bio came from her collection and it had been sitting around since she passed away a number of years ago. 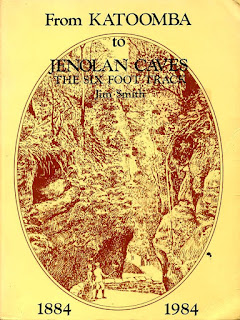 Jim Smith’s book on the Six Foot Track provided a degree of welcome relief. It required more concentration than the above bio due to its historical content. Reading reports of travelers in the late 19th Century tramping though the bush on the once accessible bush track between Katoomba and Jenolan Caves may not be everyone’s idea of pleasure. For anyone who loves Australia’s Blue Mountains region, though, this should prove to be a highly entertaining read.

Imagine walking from Sydney to the South Coast via Katoomba and Jenolan Caves! That’s what travelers did, back in the day. Strangely though, it wasn’t usual to carry water. This probably seems difficult to believe nowadays. That’s one fact that really stuck out, together with the indomitability of those early travelers. This book should be mandatory reading for anyone with an interest in exploring the Blue Mountains. 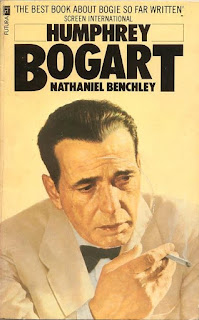 Finally we come to a small paperback that had been sitting around for decades. An appointment is Sydney meant that I needed an easy read. Normally I’d select an Bony book. I’ve read all but one, and that one is a hardback, waiting to be read, certainly, but too heavy to hold for 4 hours in the train. So from many hundreds within reach I selected the Bogy bio.

There are numerous biographies and books on Bogart. At around 150 pages this would probably be the shortest. “The best book about Bogie so far written” states the blurb from Screen International across the top of the cover. I would happily agree. The author was a friend of the Bogarts and had the full co-operation of Lauren Bacall. Without a doubt, this is the BEST bio I have read on any actor. It’s concise, low key and displays a real understanding of Bogie. The actor himself was a pretty normal bloke by the sound if it, especially for the time. This may be a short review. I suggest if you want to read just one movie biography, this is the one.

As a matter of interest, I almost finished the Bogie bio on my return train trip; all but the final chapter was devoured later on the day. It’s rare for me to pick up a book that shuts out the rest of the world so quickly and commands ones full attention. This did; enough said!

Posted by Tiptruck at 8:56 PM No comments:

The Empire Annual for Australian Boys


The Empire Annual for Australian Boys was the generic Empire Annual published by the RTS (Religious Tract Society) between the years 1909 to 1933. This example lacks the title page and frontispiece. 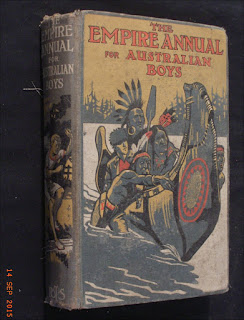 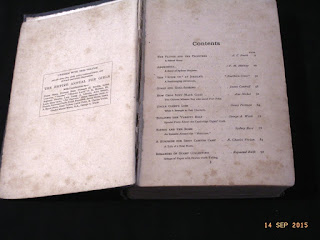 The Children's Story Book was published by Thomas Nelson and Sons who were notorious for not inserting a date in their books. Contains four Enid Blyton stories, namely "Brighteyes and the Raggle-Taggle Folk", "Peeky and the Broom", "A Lovely Surprise" and "The Mysterious Noise". 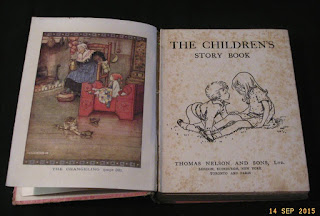 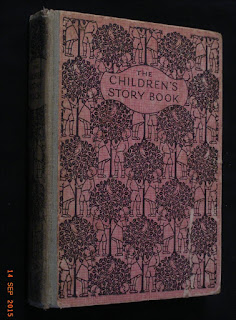 The year can usually be determined by the number on the title page, lower left, in this case, "14" meaning 1914. 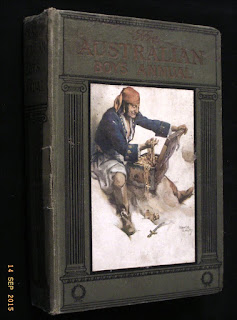 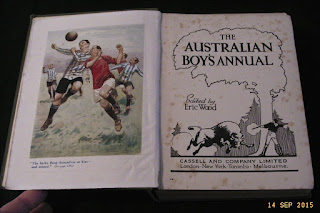 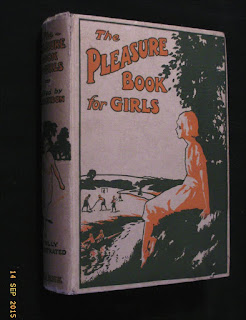 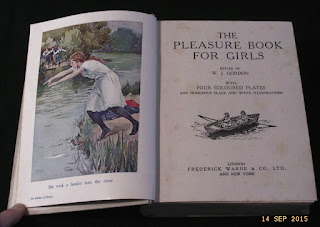 Posted by Tiptruck at 1:37 AM No comments:

Unlike Bo-Peep's Bumper Book, Bo-Peep Annual was published by Cassells, from 1882 until 1924. 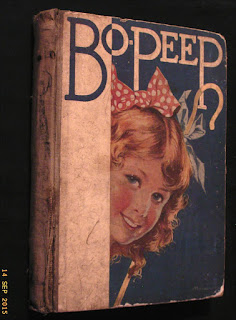 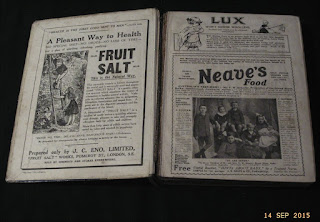 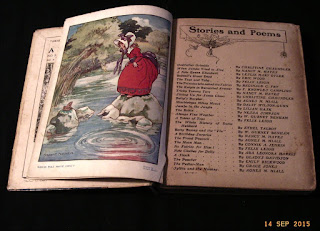 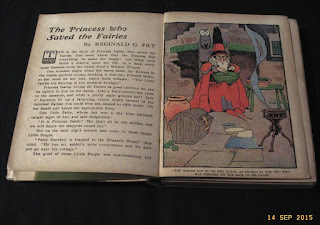 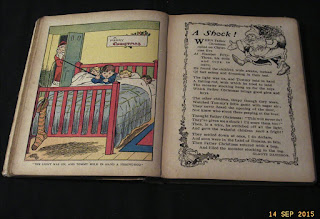 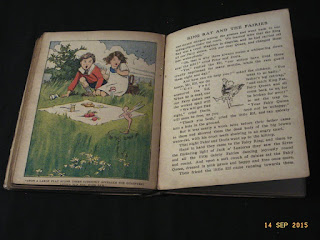 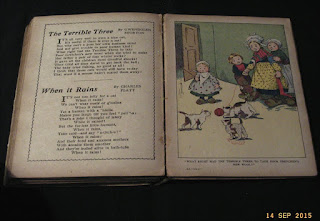 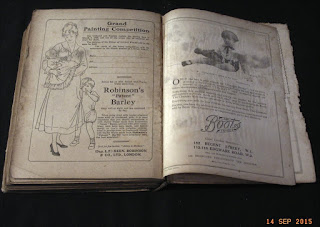 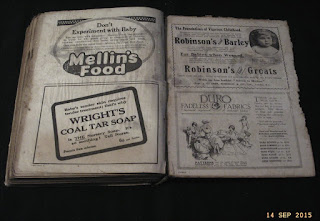